We usually stay home during Christmas eve but this year, we opted celebrating in the province with my husband’s family. We had a simple “noche buena” at my brother-in-laws house in San Pablo City, Laguna. There, my children and their cousins got to spend longer time by playing. 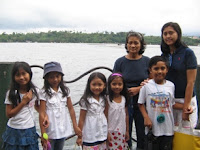 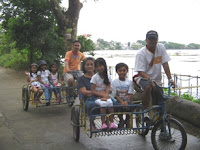 In the morning, we went on strolling around the place to see one of the seven lakes in San Pablo City. It was interesting to see Sampaloc Lake because my son’s past lesson in Filipino tackled a story or a legend about that lake. Though it was just a legend, it gave us something to think about why it was called Sampaloc Lake.
There were bicycles for rent by the lake. We decided to take a tour around the lake for the kids to enjoy the view and to know what’s surrounding it. Though the bikes were old and difficult to use, we were able to circle the lake. Our muscles got to work and how we wished there is a massage session after that exercise.
We rented two sidecars and a solo bike for me. My kids were so amazed to see me riding a solo bike. Along the journey, aside from the lake itself and the fishpens, we saw ducks, monkey and tropical trees that have fruits. It was raining a bit but it didn’t stop us from biking because we were ready with our umbrellas.
In the afternoon, we then went to Majayjay to greet our relatives. It was a long trip going home but paying respect to elders specially in this holiday season is something important for the family than all the wrapped gifts.
in Family 0 comments
Share
Post tagsChristmas 2007