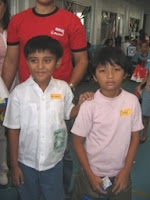 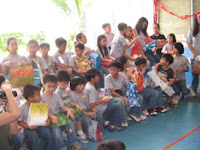 Ready to give their gifts to their sponsored kid

Indigent kids of Pasig being reached out by Victory Christian Fellowship Pasig were invited to attend a Christmas party prepared by VCS Homeschool. It was a privilege to share something with them. Our children somehow granted their wish by asking their parents to buy what the children were wishing for. Most of their wishes are toys and clothes. Most of the invited children had a letter given to the ones who gave them a gift.
There were games and food of course. Adrian won the longest Happy Birthday Jesus game as usual. I think he mastered it already. During birthday parties, most of the time he wins this game if not he is the second.
At the end of the party, everybody was satisfied that children were blessed in our own little way. As one of the teachers of these children said, “It’s really something big for them. They were so happy.”
in Family 0 comments
Share
Post tagsAll about Christmas