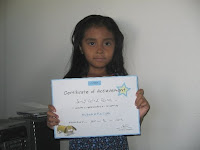 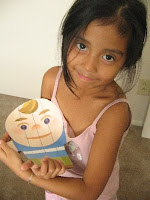 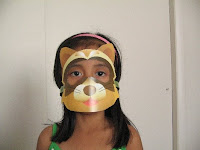 Summer was filled with kumon art activities for Michelle. Her cutting skills and following instructions were honed making her fine motor skills improved. I’ve seen dramatic changes in her handwriting and cutting after she finished the whole book.
I recommend it to 4-5 year old kids.
in Works 0 comments
November 3, 2008  by admire02 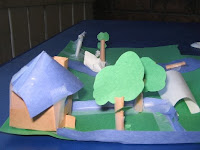 A little of this and a little of that, put them together to make a miniature house inspired by watching HGTV. 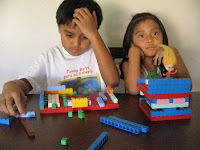 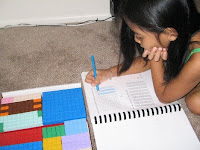 Mich uses Math U See as additional curriculum aside from Singapore math. The blocks are useful as math manipulatives and sometimes as a toy. 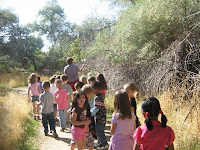 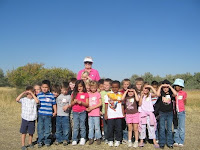 Most of the kids here who went to field trip had their first school bus ride. One of them is Michelle. They had fun inside the bus. I happened to be there as the parent volunteer to capture the moments of Mich’s first school field trip. Inside the bus, the kids were singing “The Wheels of the Bus”.

It was hot out in the field. Some kids were complaining of getting tired and thirsty. Kids get to listen to the tour guide explaining the ecosystem, different animals in the wild, how they thrive in such environment. They also played a hiding game so they could feel how animals get to camouflage themselves when enemies are watching. They were also toured to see some big birds like owls and eagles.
It was a different learning experience for these little ones and it was just so amazing to hear how they reason when asked about what they know and think about nature.
in Family 0 comments
November 2, 2008  by admire02 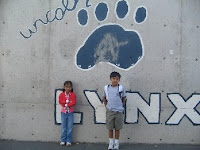 Excerpts from Lincoln’s letter to his son’s teacher

Steer him away from envy,
if you can, teach him the secret of quiet laughter.

Let him learn early that the bullies are the easiest to lick…
Teach him, if you can, the wonder of books…
But also give him quiet time to ponder
the eternal mystery of birds in the sky, bees in the sun,
and the flowers on a green hillside.

In the school teach him it is far honourable to fail than to cheat…
Teach him to have faith in his own ideas, even if everyone tells him they are wrong… Teach him to be gentle with gentle people, and tough with the tough.

Teach him to listen to all men…
but teach him also to filter all he hears on a screen of truth,
and take only the good that comes through.

Teach him if you can, how to laugh when he is sad…
Teach him there is no shame in tears,
Teach him to scoff at cynics and to beware of too much sweetness…
Teach him to sell his brawn and brain to the highest bidders
but never to put a price-tag on his heart and soul.

This is a big order, but see what you can do… He is such a fine fellow, my son!

My kids are enrolled at Lincoln Elementary. It’s Michelle’s first traditional school and Adrian’s second. They are enrolled as kindergarten and 3rd grade respectively. The school was named after Abe Lincoln. Their vision is to change the world…one student at a time.