Interestingly, there’s a place in the US where you could be in four different states at one point. It’s called Four Corners. Since we love to explore and we love geography, we took the time to visit this place. There’s not much to see but to feed your curiosity and experience how it’s like to be there is enough.

Most of the Four Corner regions belong to native Americans like this one, Navajo Nation. So when we entered this area, we are in a semi-autonomous native American governed territory. According to wikipedia, The Navajo Nation has one of the largest and most involved North American tribal governments, with organic institutions that include a judicial system, and large law enforcement and social service agencies.

To support the native American businesses, we bought some souvenirs and the necklace Mich is wearing in the picture above. It took us a lot of time for her to pick what she likes best. That has always been the hard part every time we ask her to choose. She has a lot of things that she wants to buy including an archery set. No Hunger Games that time yet but she wants a bow and arrows.

So when you visit a native American territory be sure to follow the rules. As long as you don’t violate their rules and you are kind and sensitive to their beliefs and culture you’re welcome to enjoy their land. Visitors are always welcome.

This is the most important photo op. Adrian’s left leg is in New Mexico, right leg in Arizona, right hand/arm in Utah and left hand/arm in Colorado. How cool is that? 🙂 We got here earlier than most visitors so we had the chance to have photos one by one.

But when it’s about time for family picture, there’s a lot of photo bombers.

This rock formation is one of my favorite sight in our road trip that day. I remember after taking this photo, we saw a McDonalds in the middle of nowhere and we were surprised. It was time to recharge our bodies with fast-food and use our cellphones because mostly there were weak signals or none at all. 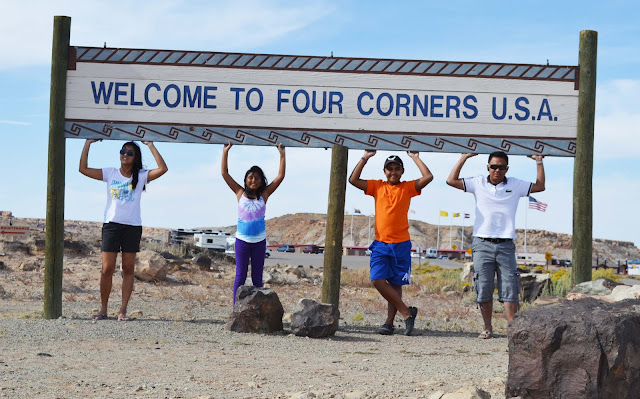 “Share each other’s burdens, and in this way obey the law of Christ.”
– Galatians 6:2

“Though one may be overpowered, two can defend themselves. A cord of three strands is not quickly broken.”
– Ecclesiastes 4:12